Roseola. It is a mild virus with no lasting effects that can cause an extremely high fever to start suddenly, induce seizures and vanish just as fast as it came followed by a rash that is the last sign it visited your little one’s body.

If I had known more about this very common virus I would have had a different experience.

The seizure Phoebe had possibly could have been avoided if I had started her on Tylenol or Advil sooner. I am a firm believer that fevers are actually good for you, the body’s natural defense system, working to fight off infection, but with roseola, about 15% of babies and toddlers will have febrile seizures. I should have had her on fever reducer immediately.

I really should have been monitoring how high her temp had gotten. It was likely up to 105 or so when she seized. It was irresponsible of me but at the same time due to a lack of education about these types of viruses and what was going on with her body.

On an aside, can I make a request that the medical profession as a whole has a little shift in their thinking?

I remember having conversation after conversation with my mom’s doctor about Ativan, a common benzodiazepine. They kept giving it to her. Every time they did she would turn into a zombie. They kept trying to tell me it was safe over and over and over. Finally I just had to say, “LISTEN, NO MATTER WHAT YOU SAY, NO MATTER WHAT STUDY YOU REFERENCE, NOTHING IS GOING TO CONVINCE ME THAT IT IS SAFE OR OK TO GIVE MY MOTHER. PLEASE PUT IT ON HER CHART THAT SHE IS ALLERGIC TO IT.” (if you note an allergy to a specific drug you do not want given to you, your parent or your child, the hospital will not be able to give you that drug. It will show up when they scan your chart.)

When we got into the emergency room with Phoebe Wednesday, she had a rectal temp reading, rectal Motrin and then they wanted to do a catheter. Finally I said no. There is no way we are putting her through more trauma today.

After three days of trying to figure out what was causing the fever and trying to get a urine sample I caved and agreed to the cath. There is a 10% chance that the fever could have been caused by a kidney infection, but no one had told me that what she was experiencing were the exact symptoms of this incredibly common virus called Roseola.

The catheter went pretty awful and in the end didn’t even work to get a proper urine sample. I stayed pretty chill through the whole thing until the doctor tried to comfort me with this:

“Well, my psychiatrist friends tell me that people can’t remember earlier than 3 so at least traumatic experiences don’t affect them, not an excuse to do traumatic things to infants, but at least she is not older.”

WHAT? ARE YOU KIDDING ME? IS THIS THE CURRENT VIEW OF MODERN MEDICINE? DRUG THE SICK SO THEY TURN INTO ZOMBIES AND IT’S OK YOU JUST PUT YOUR KID THROUGH THIS INTENSELY TRAUMATIC EXPERIENCE BECAUSE… “HEY! SHE WON’T REMEMBER IT ANYWAY!”

There are a lot of really, really good people in the medical field. Hard working, incredibly caring and compassionate people. It can be a heartbreaking field and I think after a while you can become jaded.

I left that doctor visit pretty pissed off. That guy, not my regular pediatrician, was not even looking at Phoebe. He was comparing her to other studies, all the things he had learned or been told, giving me percentage after percentage. He was not LOOKING AT MY CHILD.

Ok, I am done with my rant. Doctors are necessary and thank god we have them, but just know that you CAN say no if something just does not seem right to you.

Finally Saturday morning her fever was gone and a very mild rash started. I googled  “splotchy rash after fever in baby”. There it was, Roseola. Every single symptom she had, plain as day.

Whew. I am happy we are through this. I really appreciate all of the messages, comments and emails. I got so much useful data and support. I also learned that some of my very dear friends are also going through rough times with their children. Man, there is nothing like navigating the choppy waters of a sick child. 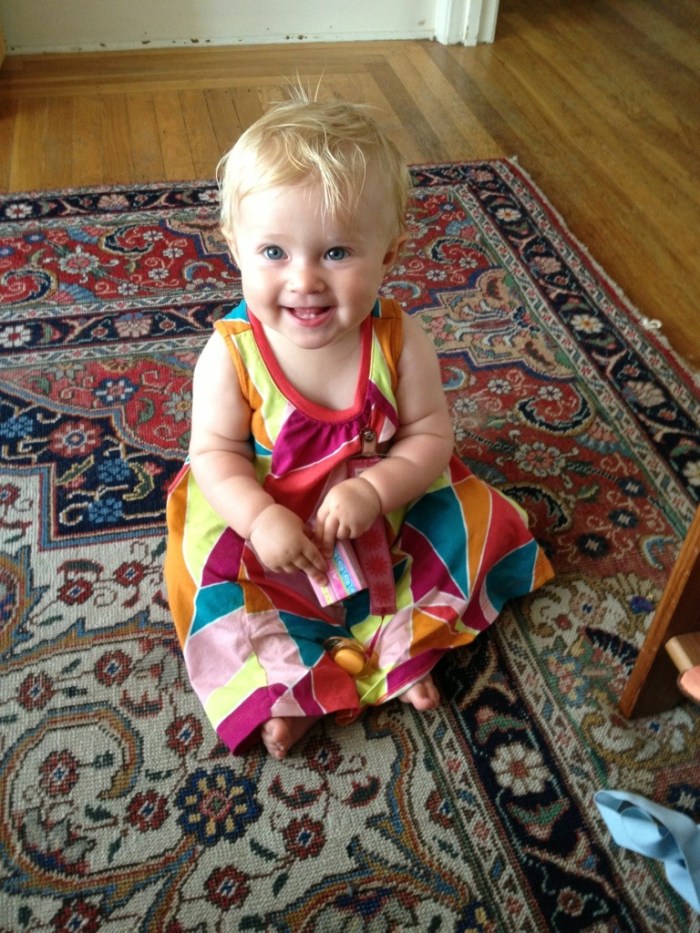