I flew out of Phoenix on Saturday and while making my way through the security line I noticed a young man ahead of me receiving his first ID check from a 50 year old blonde woman.

He stood there silently looking forward pretending he didn’t know what was happening to him.

She stood there talking into her walkie-talkie checking to see if the ticket he had handed her was a fake. She was verifying his flight existed. She had a veil of politeness about her, but underneath you could feel it. Her bigotry and judgement was pulsing through her veins under the guise of trying to keep us safe.

Of course his flight existed. The confirmation of that came over the speaker and she let him pass as if she was doing him a favor.

I moved forward in line and had a much different experience. The man who checked my ID was gracious and kind. He smiled at me and after a quick check of my ID pointed where I should go.

As I was gathering my things I overheard another TSA agent talking into her walkie. “He’s a 5’7″ male.” I turned around and there he was again. He was looking forward and pretending he didn’t know what was happening to him. This seemed to be something he was used to. There was no frustration. There was no rage. He just silently cooperated just like I silently watched.

Two TSA agents were around him this time and ushering him off to the side to pat him down and verify who he was.

In that moment I felt like I should have said something, but fear and circumstance left me silent. I tried to make eye contact with him. I wanted him to know someone noticed what was happening to him, but he stood there pretending like nothing was happening.

Is this his normal life? Is this what happens to young boys of color? He was not black. He had brown skin. He was dressed nicely enough. His hair was neat and his face clean shaven. It seemed every singe TSA agent was made aware of his presence. This polite young boy was a threat. He should not have existed.

I wonder if he knew.

So what did I do in this situation? I was reduced to a Tweet.

Let’s talk about a young man with brown skin stopped at every security check point but I sailed right through. #Arizona

I didn’t stand up for him. I didn’t take it upon myself to point out to these fearful agents that their deep seeded racism was actually inhibiting them from doing their jobs. All they saw was color. That didn’t make me feel safe. White people do bad things too.

I thought about that boy my whole flight.

I wonder if he knew. 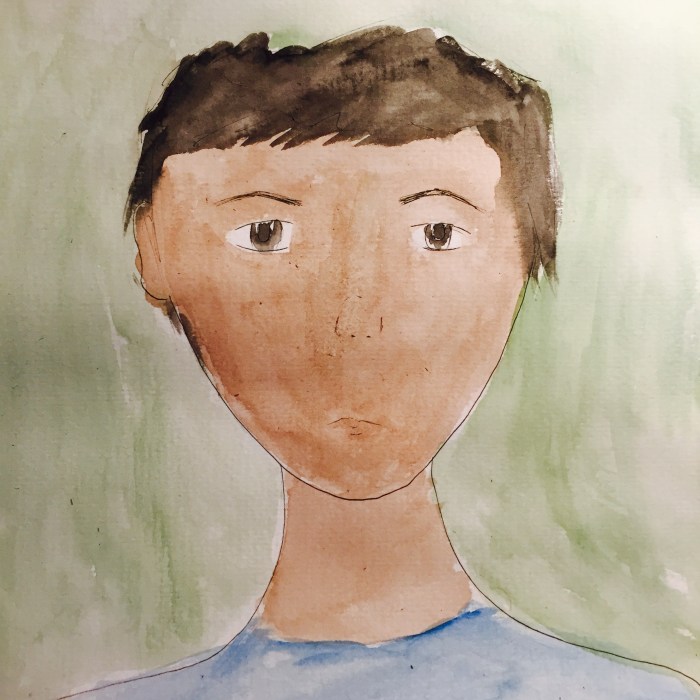 Chloe painted this for me after I told her this story.